When you encounter stress, you can’t see it, touch it, lick it. But it creates a chemical reaction within the body. Glands release hormones in response to arduous situations. Hormones such as norepinephrine, seratonin, cortisol, adrenaline. Similar to carbs in a cupcake— the body takes parts of the cupcake it can use to do work and stores the rest— the unused portion of these hormones become embedded within realms of our body.

We needed it when…

We were running from dinosaurs and chasing wild boar for dinner whilst shacking up with our cave women as apart of fight or flight mode. Over time as we evolved… the natural response and release of stress have not.

Whether you are sliding down a mastodon’s back and swinging from vines to avoid a stampede OR someone has a gun to your temple OR someone ate your lunch out the company fridge, your body releases stress hormones in massive amounts. Since maintaining composure at a high stress job doesn’t use-up the same stressful hormones released as you needed as cavemen, the hormones hang out and wreak havoc on your body.

Dopamine is the happy hormone. It is released in massive amounts when we do things we enjoy. While scientists are still exploring the true inner workings of dopamine, it is thought to be a driving factor in eradicating stress hormones.

Dopamine is released in massive amounts when you do things that you enjoy or things that bring you joy. However, in today’s society most adults do not have instant gratifying avenues for the release of dopamine that are POSITIVE. For example, if you enjoy going to yoga you can’t just start doing yoga in the middle of a stressful situation to instantly feel better. You have to leave wherever you are usually get in your vehicle or on your bike, drive to a yoga studio through traffic, find parking, sign in and change your clothes, and wait for the class to start. Meanwhile NEGATIVE avenues for instant gratification are way more abundant such as gambling, smoking cigarettes, drinking, or over indulging in a multitude of unhealthy activities.

Us millennials? We are used to instant gratification which yields more negative avenues for dopamine instead of positive ones. But there is one in particular that is positive and pretty instant: Love.

Dopamine is released in massive amounts when you are falling in love. However, the brain is so amazing but still dumb at the same time while somehow still being absolutely amazing — The body can’t tell the difference if it is falling in love with someone else or yourself. So I instruct my clients to take some time and fall in love with themselves.

However, we don’t do this for ourselves.

What you wanted when you were 18 isn’t what you want it when you were 21 or when you were 25. As you grow and change, the things you enjoy do as well. As a part of healing and changing the body, we focus on a macro and a micro level treating the body as a whole inside and out. We invite our clients to take part in the dope program, detoxing mentally and emotionally and taking some time out to fall in love with themselves. And in doing so, they learn how to either decompress from the stressors of life— using dopamine to eradicate the stressful hormones; as well as embrace the notion that if you cannot change the things that are stressing you out, you have to learn how to stress better. We end The Döpe Project with a self apology love letter of forgiveness, strength, and self love.

Start by creating your own love list. Explore yourself as if you are the love of your life and you want to know everything about them to please them, make them happy, and get them to fall in love with you back. Because you are.

Just like the treadmill that a lot of people purchase at the beginning of the year in conjunction with their New Year’s resolutions, and how the treadmill is only useful if you get on it and use i— so too is the love list. The Love List can only be an affective tool towards your life and body goals if used often. Set aside at least an hour every single week for YOU time and employing the love list. You are to do three things off of this love list every single week. Make an appointment with yourself as if it were a massage appointment or a new client or overtime at work.

If you cannot change the things that cause you stress, you need to learn how to be stressed out better.

Far too often we wallow and exist in the gray areas of life. I prefer to keep things very black-and-white. Either you ACCEPT it or you CHANGE it but there is no middle ground. I invite you to move into the black and white areas of life with me. Explore the things that cause you stress. No seriously, take some time out and write down all the things that stress you out on a daily basis. And then next to it, write down if this is something that you can accept or that you need to change.

Unless you can’t… then you have to accept it. You see where I’m going here? No room for the confusing areas of gray. Allow it to be what it is.

For example if you have a stressful commute to work instead of dreading the commute, trying to change the commute,

Or mentally whining about the commute – full of non-drivers, rude people who cut you off to the point that you had to slam on brakes, or sitting on the parking lot that is the freeway requiring an extra hour of your day where you could have instead stayed in bed – turn your commute into an enjoyable concert. Create fun playlists the night before. Turn the car into a rocking stage! Fixate your mind on accepting that you have a long commute and learn how to stress better. Fill your passenger seat with some of your favorite snacks. Remove your floormat and instead put a fun fluffy furry area rug in that space; kick off your shoes and run your feet through the rug as you drive. Add a car diffuser. Fill a sippy cup with some light champagne (no one has ever been pulled over from drinking out of a sippy cup). Im not telling you to drink and drive (the alcohol content of 4 ounces of champagne in a sippy cup will not get you a DUI), i’m telling you to take the edge off and convince yourself that you were going to enjoy this and make it a fun meaningful commute every day.

As you create your self love letter, fill in this guide:

I love you! I am proud of you because…

I am impressed by…

You have improved so much at…

And INSERT YOUR NAME, you are perfectly flawed and allowed to be human so I forgive you for…

Thank you for being so amazing. From this day forth and everyday after? I vow to love you #unconditionally. 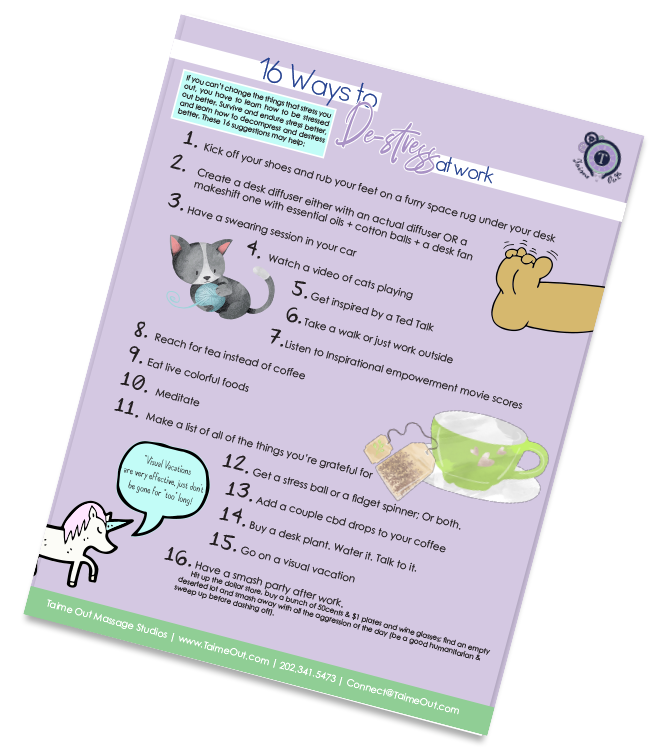 Our Free Gift to You16 ways to De-Stress at work

This website uses cookies to improve your experience while you navigate through the website. Out of these cookies, the cookies that are categorized as necessary are stored on your browser as they are essential for the working of basic functionalities of the website. We also use third-party cookies that help us analyze and understand how you use this website. These cookies will be stored in your browser only with your consent. You also have the option to opt-out of these cookies. But opting out of some of these cookies may have an effect on your browsing experience.
Necessary Always Enabled
Necessary cookies are absolutely essential for the website to function properly. This category only includes cookies that ensures basic functionalities and security features of the website. These cookies do not store any personal information.
Non-necessary
Any cookies that may not be particularly necessary for the website to function and is used specifically to collect user personal data via analytics, ads, other embedded contents are termed as non-necessary cookies. It is mandatory to procure user consent prior to running these cookies on your website.
SAVE & ACCEPT